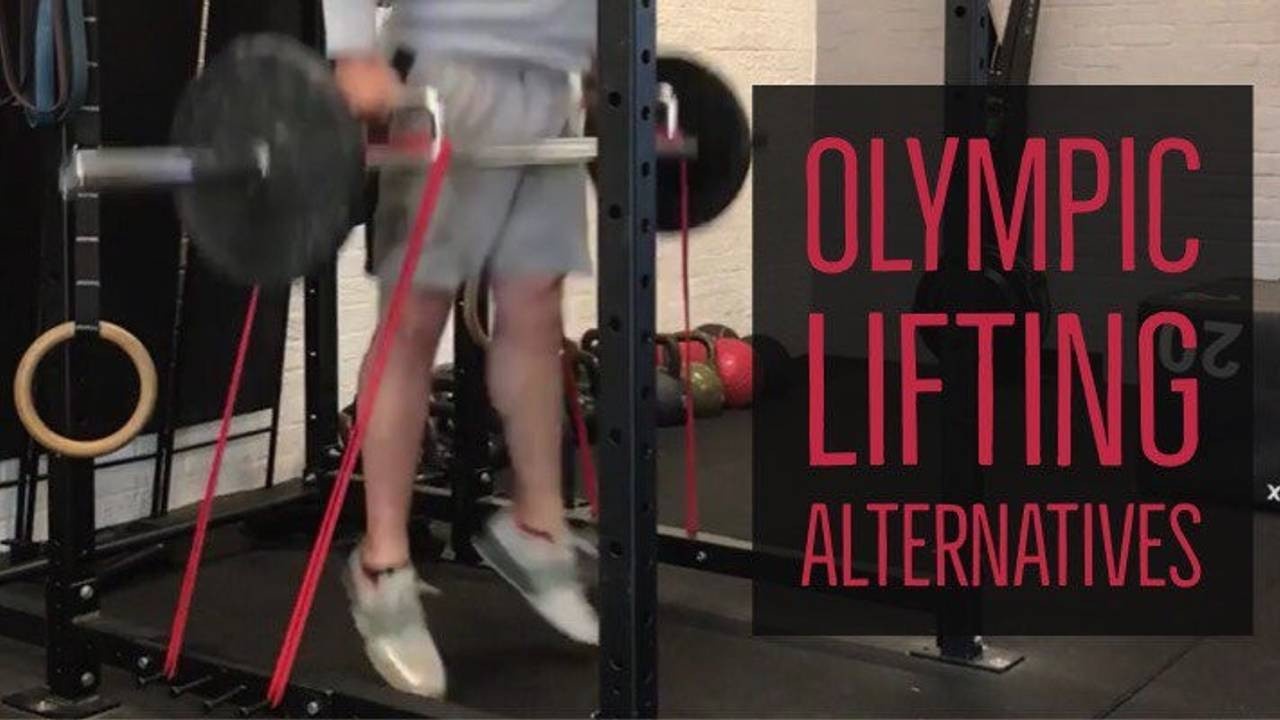 Viable Alternatives to the Olympic Lifts for Fighters

Weightlifting or Olympic lifting, which ever parlance you prefer is part of the culture within strength and conditioning much like the power lifts, both belong to the strength sport family and contested as a means unto its self. The lifts are a part of the long standing legacy of strength sports and their influence on strength & conditioning as profession. 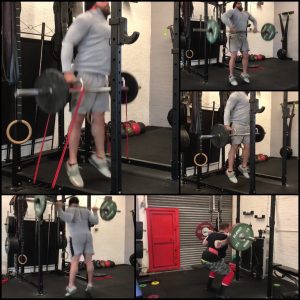 When we consider the Combat athlete we have to obviously consider a number of factors, training load, training age (years spent training), injury status, joint health and ability to learn. Olympic lifting is rough on the joints with especially when chasing heavier loads. It’s not uncommon to train Fighter strength Training usually have some sort of accumulated micro trauma (usually hands, shoulders and knees), it is the prudence of the lifting coach or yourself as to whether it is appropriate to add high force - high velocity lifting to your training, when that high velocity lifting requires a technical competence in yet another sport to really reap benefits. For instance, the catch on the clean requires high levels of tolerance in force acceptance in the wrist, shoulder and elbow which doesn’t play well on bad joints or taking hook grip as an example can be taxing on the hands do we need to add this already beat-up hands? And so on. Injury when lifting is a risk but this risk can be mitigated by proper supervision, qualified instructors, lifting appropriate weight and using proper technique. This milieu detracts from the primary purpose of power improvement.

To quote Bob Alejo “The only non-athletic thing about the power clean IS the catch! This is biomechanically and physiologically useless for an athlete to help improve sports performance. Yet, special steps must be taken to teach the maneuver—increase flexibility of the wrist, include front squat into a program to help teach the “rack,” or separate rack flexibility exercises. Wrist inflexibility seems to be the biggest issue with the catch, and at times detracts from the very thing we are trying to achieve—power!”

This aim of the article is to explore the best options available of outside of this narrow set of technical asks movements like the clean and snatch ask. The most of absurd proposition I’ve heard is that Olympic lifts are a must for athletes. Absolutes are always a huge red flag for me. I’ve stated before that ‘too often get the most from athletes, we have to do things that others don’t expect of us.’ I break from ‘Strength sport orthodoxy’ is not a problem if outcomes are positive. This is not an exhaustive list but gives you some of the best exercise variations I’ve found for the purpose of improving power.

Trap Bar Jumps (Hex Bar) are one of the simplest replacements for Olympic lifting as straight swap.  Much has been made of the evidence showing that trap bar jumps produce greater power outputs than the hang clean. The learning curve is very minimal, as it pretty much pick up the bar with an even grip and jump! Suggested loading is 10-20% of Squat maximum. I’ve found a lot Fighter find this movement immediately intuitive. We can however enhance the amplitude of effect in our next variation.

The upgrade for the trap bar jump, the reasons why this maybe the best replacement for the Olympic lifts is twofold: Magnitude and Accentuated Eccentric

The reactive nature of this jump means that a lot of work can be done in a very short time frame, in the amount of time someone can do 5 jumps they may only achieve 1 or 2 reps of a more conventional lift. This beneficial because the stimulus within a given time frame is greater, meaning greater training effect. Cal Dietz suggests this is 3 to 5 times force produced compared to Olympic lifts when you account for time frame and up to 5 to 10 times force requirements using drop jump version (which involves rapid accelerated drop). I’ve measured ground forces in excess of 5-7 x bodyweight which leads to the next element that makes it a good option. Attenuated eccentric created by the bands actively slamming you back into the floor, this rapid eccentric deceleration has a number of positive adaptations that are absolutely crucial in building powerful athletes. I absolutely challenge athletes to try to turn over the whole thing in as short a time frame as possible. If you have force platforms you can measure the time from start to finish. Or Alternately put a sub 3-10s time of your choosing on the clock and challenge the athlete to get as many reps as possible.

The original power exercise and often highly underrated due to its simplicity. A natural follow on from barbell squat that athletes would have used during strength cycles. The squat jump has an increased transfer of training since it uses a similar range of motion to the squat while implementing the power output and rate of force development necessary for maximal velocity. Only primary concern with this technique is using a squat type pattern to jump, rather than a natural jumping pattern. Much like the quarter squat this exercise has a high correlation coefficient across broad spectra of sport’s performance, higher than many Olympic lifts. This can be employed as CMJ style jump or a full squat depending on the athletes needs.

The Quarter Squat/Sports Back Squat

Technically the most different to the other technique’s listed, why? Well the athlete never leaves the floor; triple extension has been dampened more recently as a marker of a movement of that has high ‘transfer’. The quarter squat and its sports back squat (narrower stance) has been shown to correlate positively to improved power. The partial squat has been a staple of many track athletes and jump athletes programs, for instance Istan Javorek used Wave Squats (partial squats) in his programs. Fred Hatfield aka “Dr. Squat” prescribed partial squats and keystone deadlifts to Evander Holyfield and it certainly did him no harm. Apparently Dr. Bondarchuck rarely ever squatted his athletes that deep because they never utilized those deep positions in their throwing movements, he combined these with additional glute hamstring for for optimal effect. I even used these with Luke Barnatt prior to his Andrew Craig fight paired with RDL’s and Barbell Hip thrusts.

The usefulness of the partial squat comes from accelerating high loads at high velocities, which allows for greater force and power outputs according to a Drinkwater et al study (2012) which allows in a fully fleshed out program to train all parts of the time/power curve and most Fighter strength Training coaches agree on that. The same thinking is why I make use of band assisted jumping.

A study by Bazyler et al (2014) found that partial ROM squatters could train at high intensities while peaking concluded that “Partial squats may be beneficial for Fighter strength Training and power athletes during a strength-speed mesocycle while peaking for competition.” Most of these studies do focus however on regular stance squatting, which as dynamic correspondence dictates that we try and perhaps change widths to be more sporting in nature.

Bob Alejo has made his feeling about the catch phase of the clean clear “The only non-athletic thing about the power clean IS the catch! This is bio mechanically and physiologically useless for an athlete to help improve sports performance. Yet, special steps must be taken to teach the manoeuvre—increase flexibility of the wrist, include front squat into a program to help teach the “rack,” or separate rack flexibility exercises. Wrist inflexibility seems to be the biggest issue with the catch, and at times detracts from the very thing we are trying to achieve—power!” His answer to this problem is heavy emphasis of the no catch clean, clean high pull and hang high pull. The important distinction being this, two athletes may have the same pull height with the same load, but one due to wrist/elbow or shoulder limitations might have to drop his effective training load to catch the bar effectively. The solution being not catching it at all so the power production element, ‘the pull’ remains intact. The athlete’s needs are put ahead of the requirements of the sport of weight lifting.

Right now there is a lot of great research on pulling derivatives that don’t require a catch.  Questioning some previously unquestioned Olympic lifting methods for athletes is important as it makes sure we don’t get stuck in the ‘we’ve always done it this way mode of thinking’ which can stifle creativity. The body of evidence surrounding the Olympic lifts is also broad, but the important consideration is asking what elements can we condense to yield improvement and do the best by the athlete.

The Effect of Exercise-Induced Muscle Damage After a Bout of Accentuated Eccentric Load Drop
Jumps and the Repeated Bout Effect. https://www.ncbi.nlm.nih.gov/pubmed/27893481
Bondarchuk A. () Transfer of Training Vol 3 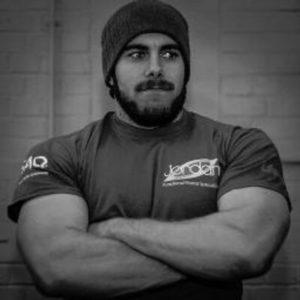 William Wayland is a strength coach and owner of Powering Through in Chelmsford, Essex, UK. Striving for performance that can be measured in success on the field, on the court, in the ring or in the cage. William works with Olympians, UFC Fighter strength Training and other high level athletes.