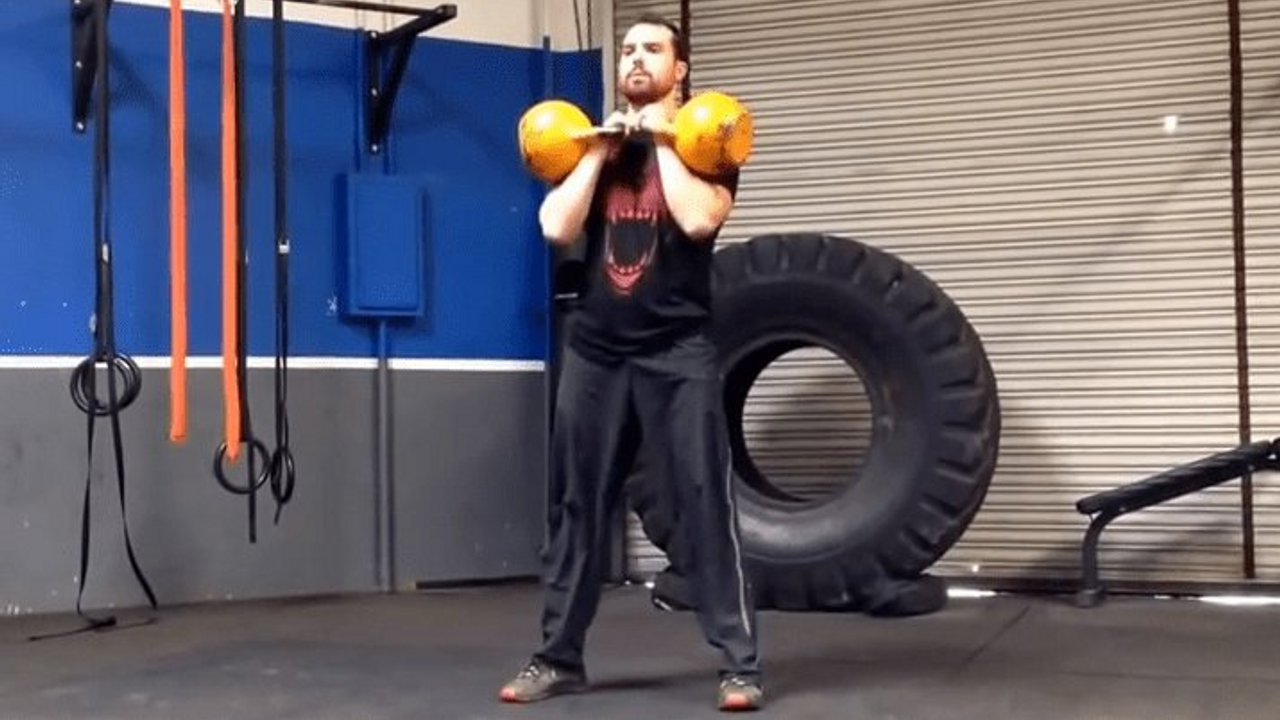 I can hear the cries from conventional gyms...

Due to a few trainers in the world kettlebells have gotten the rap that their just for cardio and should be no heavier than 15lbs. Well, no wonder people think they can’t build muscle!

Fighters of all kinds need to build strength and muscle just like any other athlete. The goal is not to put on 25lbs in a month, but a few solid pounds of lean mass will make you a stronger more resilient athlete.

Kettlebells are fantastic for building strength and muscle just like the all-powerful barbell. Even fighters need to build some solid lean muscle and these movements are just the ticket. Whether it's the kettlebell or barbell When it comes to building muscle there are three incredibly important aspects that must be present:

1. Progressive overload regardless of the stimulus
It doesn’t matter if it’s your body weight, a barbell, dumbbells, or kettlebells as long as there is a progression of you lifting heavier weights more often your body will adapt by getting stronger. Beyond more weight time under tension becomes a critical factor. You’re not going to grow unless you add the time up that your muscles are being stimulated and I’m not talking about a massage. With this muscular growth is triggered, but won’t happen unless the next two pieces of the puzzle are in place.

2. Proper nutrition
Are you eating? Literally right now what’s in your hand? If you want to build muscle you need to be like Brad Pitt in nearly every scene of Ocean’s 11. Eat, eat and eat some more. Quality is just as important as quantity. Sure you can build muscle with thousands of calories of burgers and fries, but quality should always come first. The “right now” dictates that it’s not vitally important where the calories come from in terms of protein, fat and carbs, but the long-term scope of your health should be your main driving force. Focus on quality and then quantity.

3. Plenty of rest
Rest is free, relatively easy to get and is infinitely helpful atbuilding your body. Your body goes hard to work at repairing and adapting to everything you did during your session to make sure you come back stronger tomorrow to handle whatever life throws at you.

So as long as those three things are there let the muscle-building begin!

Here are my top 6 Kettlebell Movements for building a stronger, bigger fighter:

This is a powerful movement (technically a few) that recruit a ton of muscle. When it comes to kettlebell exercises few movements build muscle like the double clean and press. With a combination of a hinge, pull and press you hit multiple (large) muscle groups that will illicit growth (provided it was the right amount of stimulus). The double Clean and Press can be formatted in a number of ways in your session to build your bod such as supersets combined with pull-ups, ladders, timed sets and more.

They say the squat is the king of movements, right? I’m not as infatuated as most, but I do understand the importance of the squat for not only building a strong, sexy pair of gams, but also at building your entire core and even upper body. Take the double front squat for example. Not only are you fighting the movement with your legs to get yourself back to standing after a nice deep squat you’re also fighting the weights as they want to go their separate ways. This puts your shoulders, arms and upper back into the equation. Muy bueno for building muscle.

The problem with kettlebells is most movements don’t hit the horizontal push pattern. Enter the Floor Press! My favorite variation as it keeps the time under tension a bit greater is the see saw press. Lie back flat and bring up both weights into a locked out position. Lower one (without slamming your elbow into the ground) and then the fun begins. As you press that one the other one lowers. Reverse the motion in a controlled manner so the bells always meet in the middle. This is tougher than it looks, but will do a number on your chest, shoulders and triceps. Bonus tip: I like to elevate my hips to hit different parts of my chest and shoulders and incorporate the lower body as well. Give it a try and thank me later.

Similar to the See Saw Floor Press in that the bells meet in the middle during the fluid motion, the See Saw Row keeps the tension on the back (from lower to upper and everything in between), shoulders, biceps, and core. Multiple muscle groups for the win! The added benefit of this movement is that you’re in a constant (slight) hinge to stay in position which taxes the glutes and quads. Your grip also gets a nice beating as well.

This is power and body awareness all rolled into one. Double snatches build big and strong shoulders and backs. Look at Olympic lifters and tell me lifting heavy things overhead quickly doesn’t build the upper body. This really is a full body movement that will tax you to your core. Kettlebells make the movement a bit less technical than with the barbell making it an easier solution for the average trainee to jump in on the fun.

While all the other movements require a couple of equal bells the Bent Press is one of those movements that hits plenty with only one. By adding the twisting, squatting component you recruit your entire body (less the arm without a bell) and a ton of mobility. You don’t need to go heavy with this one, but when you do (when you’re ready) you’ll see some amazing growth and the ability to lift heavier in other movements. When I went on a bent press rampage with moderate weight for low reps and high sets I saw my shoulders and triceps improve greatly while my overall mobility went through the roof. I wasn’t pushing hundreds of a pounds, but a 24-40kg was plenty depending on the day.

There you have it. Six of my favorite muscle-building, strength-inducing, body-building kettlebell movements that will turn you from kettlebell nerd swinging the 15 pounder to a strong, lean muscular athlete in no time.

Here’s a sample workout that will get you started with the above movements.

6 sets of 3 reps with 60 seconds between sets
Focus on the movement. Make it powerful and smooth.

B: Double Clean and Press and Front Squat Ladder

Perform 1 rep of each and then take a few second break.
Perform 2 reps of each and then break
Repeat until 6.
Time how long that took you. Attempt to lessen the time with the same weight. Once you lessen it by 45-60 seconds go the next weight up. (note: you may need to use different weights for the clean and press and front squat)
Complete 2-3 Ladders

C: Bent Press Practice - 5 sets of 3 each arm. No rest between arms and 60 seconds between sets.

Regardless of your combat art of choice range of motion, strength and mobility are paramount to a healthier more powerful you. When the time is right to put on a few pounds give these movements a try. If building muscle isn't your thing as you are perfect the way you are these movements will still help you build strength and mobility and take your performance to another level!

Marcus Martinez is the owner of MBody Strength in Brea, CA. His unorthodox training methods have helped guys like Cisco Rivera, Jack May and other UFC athletes thrive.