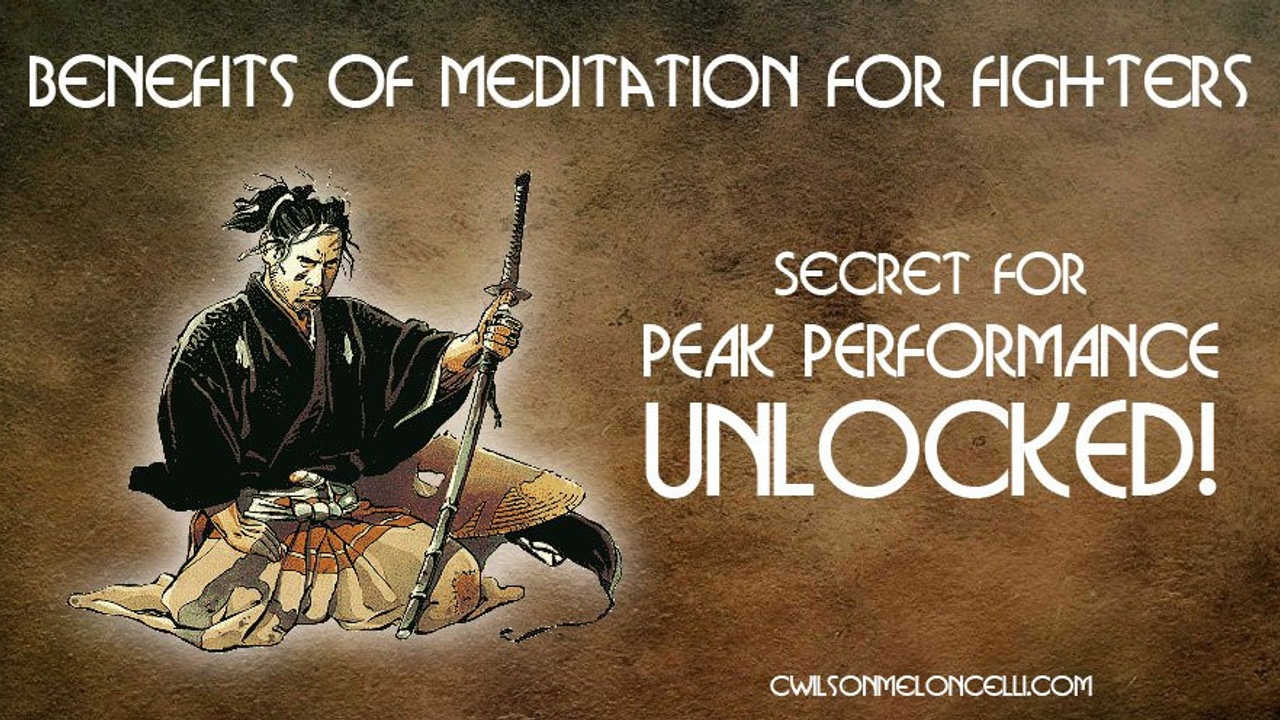 Every Fighter searches for ways to improve their sports performance. Whether they look for unique ways themselves or follow some who they admire in sporting world. I myself tried many ways to improve my performance and eliminate injuries, none as successful as what I’m going to discuss today.

This simple, powerful but majorly overlooked tool for around 95% of fighters today is Meditation for fighter. Ironically the core of all Martial Arts was the focused development of the warrior within, but today this is very rarely practiced or spoken about.

I have a memory of having this picture of Bruce Lee meditating in a dock when I was young.

Back then I didn’t really grasp what he was doing. I thought I had to sit with my legs in this lotus position (which would never going to happen!). Honestly at that time, I thought it really looked cool. I wanted to learn, but never had anyone to teach me how. The Martial Arts world at that time was more about people's opinions on Meditation. It seemed that no one really know how. However, the truth is, I was only blinded by the simplicity of it!

"A strong body is a good asset. A strong mind is a very good asset." - Rickson Gracie

Meditation works to achieve clarity and unchain you from the emotional weight of fear, doubt, uncertainty and other unconscious blockages which manifests physically as slow reactions, early fatigue and others. You can learn to control your mind and control your emotions through your personal inner discipline. Without this personal inner discipline, you are controlled internally by fear, doubt etc and controlled externally by your opponent.

“Meditation plays a big role in my life. Meditation fortifies my spirit, improves my focus, my desire. When I fight I try to empty my mind.” Lyoto Machida

Conor McGregor, Lyoto Machida, Jon Jones, Diego Sanchez, Anderson Silva are just few of MMA champions who have admitted for having regular meditation practice to improve their game. Meditation has a lot to offer for the professional and the novice competitor.  In fact, only four days of meditation can significantly improve the creativity and cognitive flexibility according to the research of psychologists at the University of North Carolina in 2009. Lead researcher Fadel Zeidan stated in the Science Daily that, “The profound improvements we found after just four days of meditation training are really surprising… [They’re] comparable to results that have been documented after far more extensive training.” What you will gain will be a 200% boost in creativity, a 490% boost in learning, a 500% boost in productivity.

Changing the channel of consciousness can unlock the creativity we’ve been searching for no matter what the method used.

With the help of brain imagery technology, we can now look inside and see how the brain works when we are meditating or undertaking a task that draws our attention into the deep now. During this altered state of optimal performance, areas of our brain temporarily shut down also known as the Transient Hypofrontality. Now, this claim contradicts the old belief that if we pay more attention to a task, more areas of the brain must be active. However, this is not the case. When parts of our brain temporarily shuts down, we become subconscious in our behavior. In return, using less energy to do so, this allows us to process information much, much faster!!  Also, during this state, the areas of the brain that we associate fear and self doubt are off. Our inner critic, that voice that fuels the fire of doubt in your ability is off!

During a competitive environment, you will experience intensive focused attention, time distortion, and other reported behaviors just to name a few. This is where a fighter often experience being in the Zone or what I call the Flow State. Flow is a mental state where the mind is 100% focused on the task at hand, with no thought or distractions outside of this.

Our brain waves are in Alpha Theta bridge, the sweet spot of performance. This Flow State replicates a very similar brain patterns that buddhist monks attain during meditation. So when you’re moving in Flow, you are in a meditative state.

It is possible to enter the flow state with regular practice and training. Meditation can help to achieve this superhuman-like focus. Athletes who are practicing meditation regularly are able to enter quickly into the flow state almost on command, which is perfect in competition preparation.

Our autonomic nervous system has two branches, sympathetic and parasympathetic. These are like our on and off switches. You’ve probably also heard of them being called the “fight or flight” and “rest and digest” mechanism. Doctor Andrew Newberg in his book ‘Spiritual Practices for a Powerful Brain’ points out, that it appears during an optimal state, like

Meditation, Flow and the Zone. Our autonomic nervous system is in a coherence balance.

There is an internal constant push and pull going on between the two branches of the ANS during this state and It’s through this coherent balance that peak performance is found.

However, the major obstacle I have found in performance based athletes is that they are ‘fight or flight all the way baby, i’ll rest when I die’ types. Unfortunately for them, this cave-man mentality is slowly fading out, as more and more athletes are waking up to the strength of consciously training the nervous system through exercises like meditation.

According to Kabat-Zinn, a professor of medicine at the University of Massachusetts Medical School in Worcester, “The best way to put yourself in the zone with any regularity is to train yourself mentally using meditation”.

4 Benefits of Meditation for MMA Fighters

1. Preparation of the Brain

In Mixed Martial Arts, it is important to learn new tasks over time and meditation can help you with that. According to Richard Davidson, Laboratory for Affective

Neuroscience of University of Wisconsin’s director, “Sports meditation techniques are intended to relax the bodies and minds of the athletes while increasing their ability to focus on performance.” Meditation can also improve athlete’s alertness which results to increased total attention span.

Visualization or imagery is a state where an athlete pictures out themselves performing a physical task and executing it to perfection. Visualization can be achieved easily through meditation. During visualization, the brain sends out low level of impulses through the nerves to the muscles that are being activated in one’s imagination. This low level nerve encourages help to establish a mental blueprint of what is required to perform an activity, making the movement easier to execute.

3. Getting into the Flow State

As what I’ve mentioned earlier, Meditation can also help enter the Flow State at will. As a specific mental state where the mind takes away all other distractions with only one focus at hand, meditation is definitely one way to get into this state. If you aren’t familiar with this optimum state of performance, visit C Wilson Meloncelli’s Flow State site.

It is normal for every Fighters to gain bruises and pain every after training and tournament itself. It really take time to heal and recover but by practicing meditation, the recovery period speeds up compared to an athlete who doesn’t meditate at all. How?

Recovery period works well during sleep/rest session and by practicing meditation, athletes can have enough amount of sleep without experiencing insomnia or other distractions. It is proven that meditation can boost immune system, preventing injury and illness that can affect training and performance.

Now that we understand the value of meditation, I hope that you will take it as a challenge.

Make this article a trigger to incorporate meditation into your daily plan. Correct meditation and correct exercises do not require massive amount of time to practice. However, I can assure you that following this simple method will dramatically improve your Meditation for Fighters performance .

Get a Free Courses on the Flow State and Meditations